Mechanical reliability and safety of the HV Battery

The evaluation of mechanical reliability and safety of HV batteries was mainly done by the OBELICS partners Bosch und Fraunhofer LBF. Primary goal is the deeper understanding of the battery behavior during field relevant vibration loads, while the secondary goal is a tailor-made implementation of a novel probabilistic FMEA for battery systems. Therefore, a measurement campaign was initialized with a Fiat 500e battery system supplied by Bosch. The battery contains 97 electrically connected battery cells arranged in five and six cell modules. The total mass of the battery system is about 270 kg. The scalable tests were performed in a multi-axial test rig with climatic chamber available at the LBF Fraunhofer Darmstadt.
The motivation for this research is to determine the transfer function between the fixture points of the battery and several areas in the interior, especially the housings of the cell packs. For this purpose, a total of 8 tri-axial MEMS accelerometers, which are built inhouse at Fraunhofer LBF, and 10 strain gauges have been positioned inside the battery. The battery is then attached to the testing fixture developed to hold it in position during measurement tests. In addition to these sensors, there are reference accelerometers (accelerometers used to monitor tests) placed adjacent to mounting positions (outside) of the battery, and at positions similar to measurement drives to gather data. The tests are performed at the multi-physical testing environment in Fraunhofer LBF, which consists of a multi-axis shaker table (MAST), a vehicle energy system (VES) and a climatic chamber (CC), as shown in figure 1.

In order to gain the excitation data for the test stand, test track drive measurements were made using a fiat 500e with sensors on the fixing positions of the battery and on the suspension system. The car was driven on a test track which consists of a series of bumps at various speeds (20 km/h, 30 km/h and 50 km/h). These data were the applied to the test stand, and the acceleration data on the specified points in the battery were monitored throughout.
In below figure 2, a comparison between the actual measured accelerations and international standard ISO 12405 is shown.

We learn from these measurements that the excitation of internal components in the battery system can be highly exaggerated compared to the introduced profile on the mounting points. Consequently, the load profile for a single component test (e.g. battery module) must be exceeded when compared to the global vibration profile, when just a single component should be tested (e.g. a single battery module). The probability for an underestimation of the vibration profile by using the global vibration profile for battery components is quite high.
In the last period of the OBELICS project, the focus will be on converting this information into a failure rate estimation, which is necessary for the desired quantitative reliability evaluation. As shown in below figure 3, a quantitative failure rate value (FIT = Failure in Time) will be introduced into the novel probabilistic FMEA (probFMEA) developed within the project, combining failure rates from different domains within the entire power train to an overall system reliability value.

Report on the H2020RTR conference 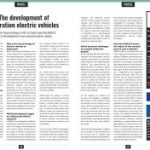